I’ve been thinking a lot about hate.  Why do people hate?  What drives someone to hate so much that they look for ways to hurt people?  Why do they want to hurt someone for no apparent reason?  It’s hard to understand hate.   It’s really hard to understand the type of hate that causes someone to act out unfathomable violence on people, children, and animals.  When reflecting on that type of hate, I have to admit my first thought is that the person must be mentally ill.  That seems like the obvious answer.  However, this answer simply isn’t good enough for me.  It’s an easy excuse more than a valid cause.  I’m not saying that mental illness is not a valid condition. I believe even in mental illness there is a factor of hate that establishes itself.  Hate has no excuse and to excuse hate as a mental illness does not put the weight of responsibility where it truly lies, in our own hands.

When I think about why people hate there is a saying I think of, “hurting people hurt people”.  There was a time in my own life when I felt a strong dislike for another individual.  That feeling derived from my own pain.  Over time the pain and hate I felt grew as the individual chose to act in ways that negatively impacted my life.  I began to keep track of all the things they did to cause me harm.  Those events were hurtful and caused me great emotional angst.  I saw myself as a victim.  I truly suffered emotionally and physically.  The emotional struggle became an anxiety disorder.  The emotional and physical suffering grew my hate. 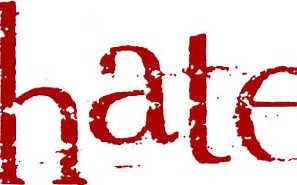 Hate owned me.  It would not let me have peace.  If I heard of anything good happening I would ruminate on my hate for them.  After all I was still suffering and they were enjoying the good things in life.  If I heard of something bad happening to them, I would feel satisfaction that “karma” was paying them back.  However, no matter how much karma paid them back, I still felt the same personal pain and suffering.  Karma never resolved that.

It has been a long time since I have felt those feelings.  It was a long process of healing and forgiving before I was able to be free of hate.  When I started to see how the hate I felt and the stories I told myself about being victimized were hurting me instead of hurting them, I knew holding onto hate was futile.  I’ve written about my experience with un-forgiveness in the past.  I’m bringing it up again only to make the point that hate was my own state of mind.

When we hate someone or a group of someones, it’s because we’re telling ourselves a story about how their actions are victimizing us.  Hate begins in our own thoughts.  When we believe someone is intentionally doing something to harm us or cause us discomfort we begin to keep a list of their actions.  We keep records of their ill intent.  I’ve heard people say, “I know what (he/she/them) is trying to do.”  When in reality we can’t really know what someone else is thinking.  When we see ourselves as victims we lose our power and our ability to change the circumstance.

I’m not saying that people aren’t responsible for their actions, they are.  Of course there are people out there that do mean harm and negative intent and we should always be cautious knowing that.  What  I’m pointing out however is what my daughter said so simply, “Hate justifies their actions.”  When we speak hate talk about a person or a group we empower them.  Hate gives a sounding board to those claiming victimization.  Hate gives cause to action and allows the cycle to continue.  Thanks to hate extreme actions appear justified.

Hate is weakness in us.  Hate allows us to justify atrocities that we would never allow happen to our loved ones.  The stronger, the more obvious, the more blatant the hate, the weaker we are.  Hate has an inverse relation to ego.   The weaker the ego the greater the hate.  Someone who has a strong self-worth and sees their value is able to also see value in others.  Those with a low sense of self-esteem also place little or no value on others.  When you see yourself as a victim, when you see yourself as having low self worth it becomes easy to see others that way also.  Hate becomes easy.  First we look for someone to blame,  then we associate our suffering with their actions.

A weak ego is not strong enough to forgive, to love, and to attain the ultimate state of forgiveness, to forget.  We in our humanness will never forget an atrocity.  But, for the sake of human existence to forgive is not just important, it is necessary.  Imagine if we never forgave anyone for any reason.  Every misdeed even those done on accident would cause rifts in relationships so great we would not as a society be able to exist.  Relationships in general would be impossible.

Instead of hating, blaming and seeing ourselves as victims of society, we need to recognize we are part of that society.  We individually have responsibility.  It is necessary for our existence to step back and see those we hate for who they really are, broken, hurt, disappointed, devalued, self-critical, and weak.  And those are the same things we feel in our hate.  Martin Luther King Jr. is quoted as saying, “Hate cannot drive out hate, only love can do that.”  The actions of those with ill intent will continue no doubt.  But we don’t have to manifest hate because of it.  We can be stronger, we can choose to forgive, to love, and to heal.  We can choose not to hate. 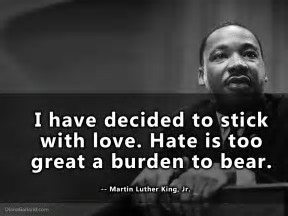